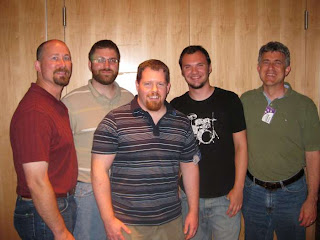 Greater Europe Mission has an annual conference every year for all of its missionaries. One distinctive of Greater Europe Mission is that we are all pretty much on one continent (we do go into North Africa and in some of Asia as well – that’s the “Greater” part). At this conference, I got the privilege of having a team of technical people come and work on missionary laptops. You see, even though we are all on one continent, it is extremely difficult to support the over 300 missionaries that we have out in the field. With everyone coming together to one place, it gives us the opportunity to help them in ways we can’t always do that through out the year. We have been doing it for several years now and the missionaries came with their laptops (and other equipment) in hand ready to be helped.

The team (most of whom are shown above with our GEM IT Director, Kirk in the middle) did a wonderful job not only fixing laptops but spending time with the missionaries helping them understand how they can do preventive maintenance and use the computers. They worked long hours (sometimes leaving at 2 or 3 AM in the morning only to return at 6 or 7 AM) but they had servant hearts. We also had one lady with them that gave one on one software training helping missionaries use their computers to their fullest.

On a personal note, these men really spoke to me as in early June, our original team told me that they couldn’t make it this year. I sent out a panicked email and within a week these men responded with “We’re coming – now where are we going and what are we doing?” They were willing to be servants of our Lord and it was appreciated.

This site uses Akismet to reduce spam. Learn how your comment data is processed.